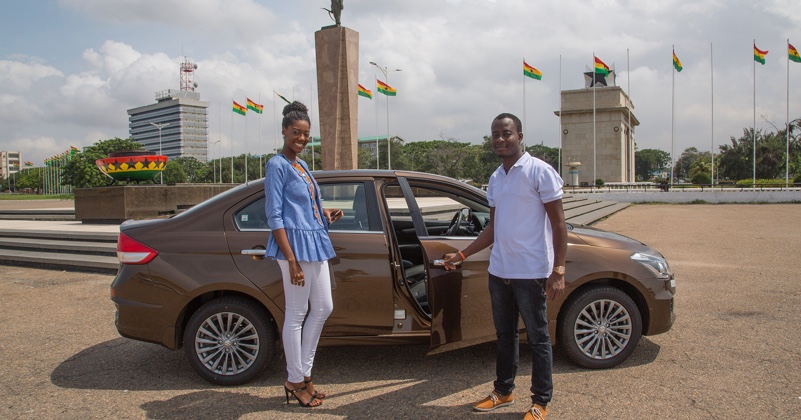 Somewhere mid-June, Accra became one of several African cities across the continent to have the ride-sharing and taxi service, Uber, launched in. For many years, the local taxi system had dominated the market with their sometimes-exorbitant charges. Uber Accra has come to shift the market.

Uber, started in 2009, has Accra as the 467th city it launched in. Over the past 8 or so weeks, I have used the app/service several times, and noticed quite an interesting change on my last ride — there was a local taxi being used as an Uber.

On a Thursday evening, while waiting for an Uber to ride home, some friends and I were met with a White-and-yellow — usual Accra Taxi style — taxi waiting for us instead of the usual Black Uber ride. The response from us? Mixed feelings. A few minutes into the ride, I decided to do some probing, as usual.

For this driver, he had enjoyed a whopping 70 rides in 7 days. As you would expect, he confirmed that running as an Uber was better than normal taxi-ing, except for outskirts when you have drive back alone. He, being the sole owner of his car, unlike other Uber drivers who drive for the partners, got to drive more than the usual 12-hour limit. From another post, I reckon the team has signed up even more local taxis.

Previously, I had taken some Uber rides and my conversations with the drivers revealed some info about the service runs in Ghana. Initially, there were about 4 partners companies whose cars Uber Accra used. Also, it was interesting to note as the drivers shared some trends about how passengers, mostly millennials, commute with the app, from work to the beach, to the club, parties, etc. Initially there were about 250 cars which had only 180 of them occupied. It looks that all the cars have been signed up, now that Uber is asking for more drivers and partners from Accra.

Now come to talk of the experience, I think most of us may know what the Uber experience is like. It’s amazing they are able to make profit even though they charge that low and still provide AC. The drivers are usually nice, some asking you to give a good review of them. And it made me wish Uber was available in Takoradi after a trip there a few days ago.

There’s also some update you might have heard of some weeks after Uber launched in Accra. They signed an agreement with the Minstry of Transport “to officially welcome” Uber. The SOU is a start in producing a new, forward-looking regulatory framework that allows for ridesharing technology and regulates its use and adoption by both riders and the individual drivers and companies that use it to source business.

Having partnered SMSGH to offer and handle payments also seems a step in the direction to support local tech and payments infrastructure.

In increasing capacity of staff and drivers, the company also put out notices for car-owners and drivers to sign up. Notwithstanding their 25% commissions to compensate for the almost constant flow of passengers, it’s good incentive for any driver or partner who would want to sign up. There was also a job vacancy for an Operations and Logistics Manager for Accra operations. Applications are closed now.

We clearly see that Uber Accra is taking steps to dominate the market. A lot more people have expressed that there are not enough cars as they keep getting the less-exciting “No Cars Available” response. Hopefully, more partners would sign up to make cars available when needed. If you’ve followed non-Ghanaian tech arrivals, you’d remember that Easy Taxi once ventured the on-demand taxi market in Ghana. It’s a surprise they didn’t succeed, makes me think they were in before the market was ripe.

Uber seems resolute to dominate, and maybe control the market. With happenings in other countries from non-Uber taxi drivers, Uber Accra could sign up more local taxi drivers to help cut down the possible backlash when the Uber drivers “claim their market.”