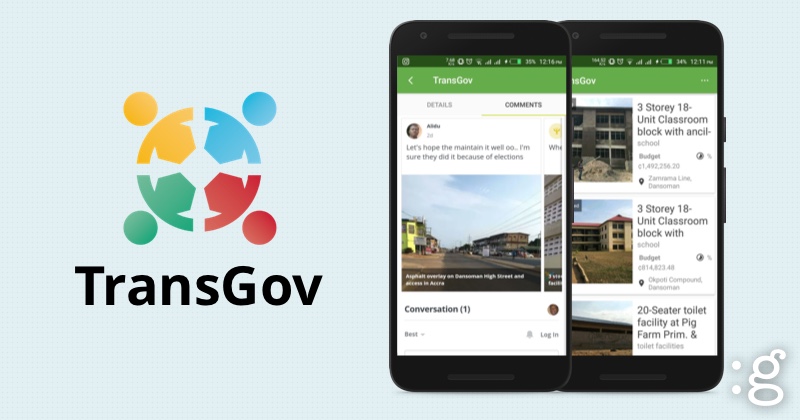 Just like every other election year, 2016 has seen a lot of developmental projects happening across the country. Sometimes, these project are out of goodwill. Other times, mostly, they are out of a need for politicians to prove they have done some work in the constituencies. And you wouldn’t usually keep track of these projects, but TransGov wants to help you to.

TransGov is an development-related innovation that leverages Ghana’s Open Data Initiative (GODI) to enable citizens to monitor and comment on the implementation and progress of developmental projects in their local communities and nationwide. TransGov also tries to simplify developmental project data for normal Ghana citizens.

As you would expect, such projects usually have lots of information about them. TransGov does well to simplify the data on these projects, to make it easier to understand. Sometimes, they are event translated to local Ghanaian languages. The team also uses infographics to explain the budget(s) allocated to those developmental projects, as this helps to understand them better.

Moreover, the TransGov platform allows users/citizens to ask questions about the projects, and contribute other details that may be missing about the projects. Currently, the main categories covered on there are transport, ICT, health, education, and agric. Obviously, there’s a whole lot more categories which will be added as more data on the projects becomes available.

TransGov is a project started by some folks from the MEST Community. It was founded in May 2015, and was registered some 5 months after. The team raised initial funding from the Tech4Governance competition organised by PenPlusBytes as they walked away with $60,000, which has been a first successful step, and has since made much progress with the app. The team currently comprises Jerry King (CEO), Kennedy Anyinatoe (CTO), Prince Anim (CFO), Kwame Yeboah (CPO).

The team is looking to partner organisations that undertake developmental projects, in Ghana. Contact them via Facebook, Twitter, or email Jerry King at jerry@transgovgh.org, or Kennedy Anyinatoe at kennedy@transgovgh.org.

The platform is also accessible via the Android App, the TransGov website, an SMS platform, and an IVR service.