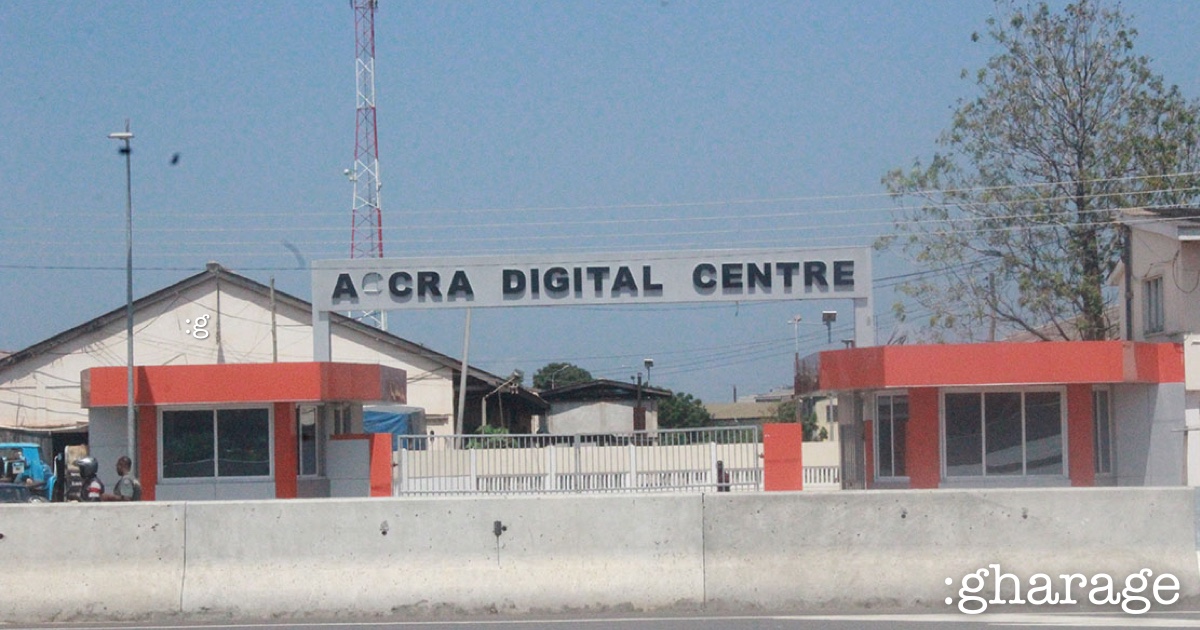 Creating jobs is a no-brainer when governments are looking to create income, generate more taxes, and build the economy of a country. Within the John Mahama administration, the government developed a new facility, one they expected to generate/hold some 10,000 jobs. This facility is the Accra Digital Centre(ADC). You’ve probably heard about it. I took a trip to the facility, something I’ve wanted to do since December last year, and I’ve got this to say.

First, the Accra Digital Centre is located on the Ring Road, after the State Housing Corporation, when you’re coming from the Kaneshie side. Here’s a map snippet to show exactly where it is.

The entrance looks presentable and de_ent, and makes you feel it’s a big place, just as the images present.

ADC has 3 main large buildings, each with 4 large halls, totalling 12 halls in the whole facility. The open halls have been created to allow companies to purchase office space as much as they want, something I thought was a good idea. ADC will handle all the partitioning so that — especially for halls with lots of startups — the partitioning will be similar and uniform. So, however large your company size is, the open-planned spaces will be best for you.

The large halls could also, even more perfectly, serve as event centres for conferences, trade shows, meetups, hackathons, etc. This was something I have always wondered about, when it comes to a place for tech events, which is central to town. Having such large spaces in a central place, near the Kwame Nkrumah Circle and the many transport access points will be great for event participants without vehicles, etc.

You are probably asking about the management of the Center. Since this is a government-led facility, it has been assigned to a ministry; the Ministry of Communications. I wonder why such a project tagged “tech” wasn’t placed under the Ministry of Science and Technology. Maybe folks thought about telco’s who are regulated under the NCA, and hence thought Ministry of Communications. Anyway, read on. The Accra Digital Centre is managed by a company under the Ministry, called Ghana Digital Centres Limited, and I checked; it’s a real company. They run a similar facility in Tema, hence they seem to have some knowledge in the area. Made me worry about stuff less.

As communicated to gharage by the team, the Tema facility already has companies working there, which was relieving to hear. This brings me to the next point, which has become a point of concern recently. As of July 11 2017, when I made the trip, there was no company on site. As explained by the team, within the next month, there would be companies who will become residents. So I asked for an explanation as to why this was the case. We all know how transition is actually t-r-a-n-s-i-t-i-o-n when it comes to Ghanaian politics and new governments. Even though the centre was inaugurated in November 2016, the structures were not put in place for companies to come in yet. Over the past 6 months since the new government came in, the team has worked on putting some structures in place so that startups who come in will be ready to roll when they arrive. As communicated by the team, they already have applications from several companies, ranging from a 5-person team to a 4000-person company.

And that explanation made sense to me. I was actually impressed that they would take time to “vet” the companies that applied, even to the suggestion of making company background checks, something which is super important for government-led organisations to do. The facility also had a power plant which seems adequate to handle the power needs of the companies which will be on site. Another reason for the delay in operations would be internet. As communicated, ADC has in place, fiber optic connections ready for the startups that come in so real work is not disrupted by important everyday necessities such as these.

The Accra Digital Centre has 3 main buildings, named after ministers of communications. Each building is named after a former Minister of Communications, so Edward Salia, John Mahama, Albert Kan Dapaah, Ekow Spio-Garbrah. Yes, I was surprised to see Kan Dapaah there because all what comes to mind about him is Minister of Energy. Anyway, some propaganda here. Come to think of it, maybe John Mahama wanted to name one of the halls after himself, that’s why he used Ministers of Communication instead of Ministers of Science and Technology. And his name was in red too. Propaganda ends.

Eventually, the centre wants to be able to provide incubator services for startups as well, something I truly hope goes well. Because startups need a lot of help. A Lot! And this is one of the reasons why I think they had kept long. Hoping to form all those alliances before real business begins.

Since it is the same company which manages both the Accra and Tema Digital Centres, it seems to me that they are aware of how such places really run, and want to be able to put a good first step when companies come in to the facility. And they are looking to make both Accra and Tema poster children for digital centres in Ghana, something they hope becomes a part of all regional capitals across the country. And that would be great news!

The facility is well laid out with parking spaces between the main buildings which will be good for large events or when the place is fully in use.

But the location of the place is someway oo. Before you get there, you’ll either have to cross at the entrance/exit of the new Kwame Nkrumah interchange, which is usually busy. Eventually, there may need to be an overhead bridge close to that entrance, if the centre increases in passenger traffic. If you’re driving, and coming from most parts of town, you’ll have to make a U-turn all the way at the Obetsebi Lamptey Roundabout and drive towards circle/”Dubai” before you can take the outer lane and make your turn into the building.

Another thought that just comes to mind, which I completely forgot to comment on or ask the team about is about eateries. Even though the structure of the facility is suited most towards traditional office spaces, it will be great to have some food joints on site so workers can have lunch there. If you know of any food franchise or joint, they could take a look at having a branch on the centre.

The compound of the Accra Digital Centre also houses some offices of the National Commission for Civic Education, which are to your right when you enter the facility.

It’s rare to see such centres being invested in by governments. I truly hope this has come to stay, and will thrive. It brings to mind a similar project in France, Station F , which is built at an old transport terminal and will house up to 3000 startups, in one place! It’ll be good to see something that massive happen in Ghana. Maybe the Silicon Accra Project could be up to that task.

Among the many other resources startups need, hopefully the Accra Digital Centre will provide a home for most startups, and a price suitable for startups to operate and grow as we all want them to. It could become your next co-working space. If you haven’t thought of there as your next office, it’s still open to applications.

I’m excited I was able to bring this write and share with you. Lots of new things I found. If you’re still reading this and enjoyed this long write-up, do well to share it. Add your comments as well.