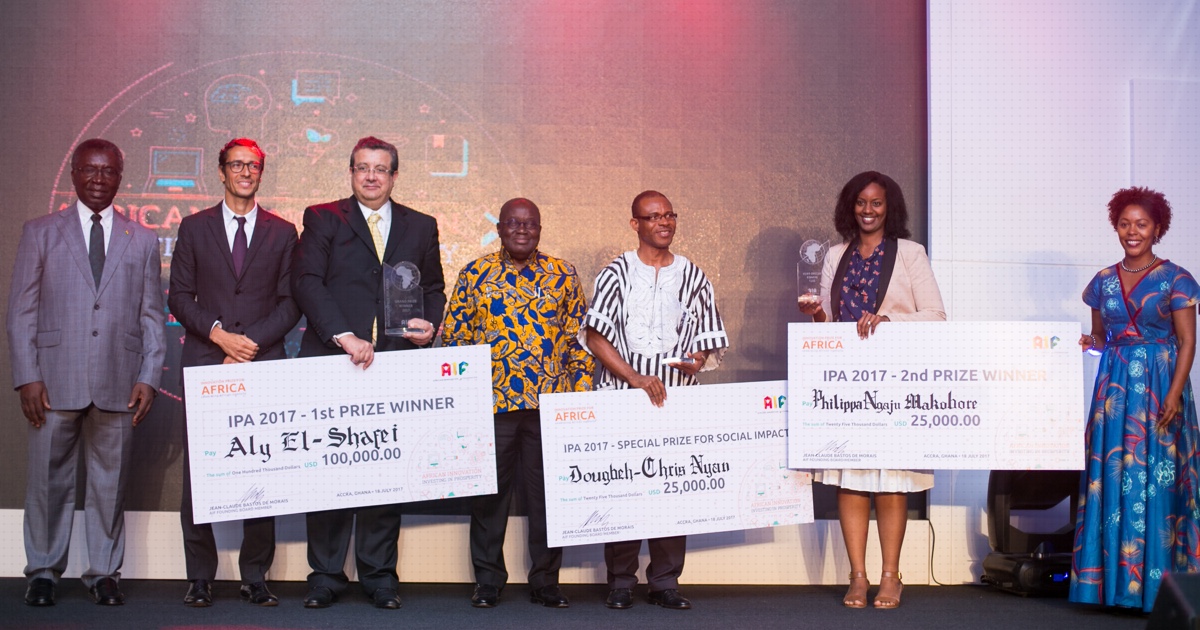 The sixth edition of the Innovation Prize for Africa (IPA) culminated with a bang as the African Innovation Foundation (AIF) awarded three more African innovators for their incredible innovations. Out of the total of over 2500 applications across 48 African countries, 10 nominees were selected Eventually, Aly El-Shafei of Egypt emerged as the Grand Prize winner, with Philippa Ngaju Makobore of Uganda landing the Second Prize, and Dougbeh-Chris Nyan of Liberia winning the Special Prize for Social Impact.

Each of the seven remaining nominees also went home with US$ 5,000 voucher to be used to further develop their innovations. Moreover, all nominees and winners will benefit from IPA post prize activities aiming at moving their innovations to the next level. Additional incentives for the 10 innovators include investment opportunities, training and access to our vibrant network of innovation enablers, ongoing PR support and media coverage.

Dr. El-Shafei’s innovation, Smart Electro-Mechanical Actuator Journal Integrated Bearing (SEMAJIB), is a world-class solution that supports energy generating turbines and can be used to improve efficiency and reduce costs of generating energy in Africa. The patented innovation, SEMAJIB), by Dr. El-Shafei who walked away with the Grand Prize of US$ 100,000 is a smart bearing that significantly improves turbine performance in single line combined cycle plants as well as conventional generator technology. The device is designed to support energy generating turbines more efficiently and cost effectively in Africa. Production of these bearings in Africa will also generate jobs and increased revenue for Africa.

Philippa Makobore’s invention, known as Electronically Controlled Gravity Feed Infusion Set (ECGF) and Dr. Nyan’s multiple disease rapid detection test, both offer ingenious solutions aimed at raising the quality of healthcare provision in Africa. The set is designed to accurately administer intravenous (IV) fluids and drugs by controlling the rate of fluid flow based on feedback from a drop sensor. It features alarms for rate of infusion (rapid or slow), total volume (over or under) and faulty sensors. A battery utilizing a hybrid (AC mains and solar) charging bed powers the device. The ECGF has the potential to save lives by providing accuracy and safety at 8% the cost of a brand new infusion pump.

Dr. Dougbeh, who was awarded the Special Prize for Social Impact of US$25 000, developed a rapid test that can detect and simultaneously differentiate at least three to seven infections at the same time. His diagnostic test is able to detect and distinguish multiple infections which bear the same symptoms for instance, when a patient has yellow fever, malaria, and Ebola. Whereas most testing methods take three to seven days, this device gives test results in ten to forty minutes. The results have been validated with human clinical samples, peer-reviewed and published in several respected scientific journals such as “Nature-Scientific Reports.”

AIF collaborated with the Government of Ghana, represented by the Ministry of Environment, Science, Technology and Innovation (MESTI), Ghana Investment Promotion Center (GIPC) and [email protected] Planning Committee to host IPA 2017, which was themed “African Innovation: Investing in Prosperity”.

AIF Founder, Jean-Claude Bastos de Morais, Founder, African Innovation Foundation, commented, “AIF has rewarded IPA 2017 for developing solutions that can truly add value to the lives of Africans, and I believe that these innovations have incredible commercial potential and will succeed in attracting the right investments to go to the next stage.”

Speaking at the Awards ceremony, H.E. President Nana Addo Dankwa Akufo-Addo, the President of Ghana, commented, “As Ghana marks 60 years of independence, there is no opportune time than now to reiterate our nation’s commitment towards investing in innovation-led growth and prosperity. Our decision to partner with the African Innovation Foundation (AIF) to host the 2017 edition of the Innovation Prize for Africa is a result of our commitment to support African innovation not just at a national but at a Pan-African level.”

For the first time, IPA nominees include innovators from Democratic Republic of Congo, Liberia and Zimbabwe, and featured a stronger presence of women that in any years past.
To date, IPA has attracted more than 7,500 innovators from 52 African countries, making it a truly Pan African initiative. The Foundation has supported past winners and nominees with approximately US$ 1 million to move their innovations forward. Due to exposure generated by IPA, past winners have gone on to secure over US$30 million in investments to grow and scale their businesses.

For more information, contact the team on Twitter via @AfrInnoFdn  or check out the IPA handle,  @IPAPrize.