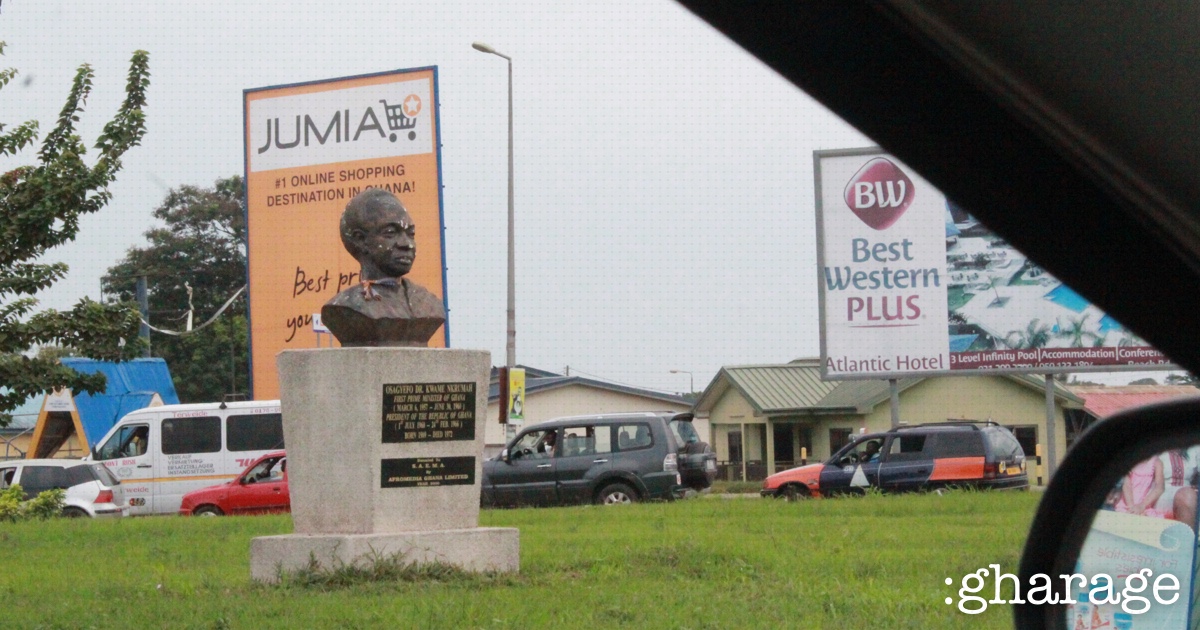 The Kwame Nkrumah Roundabout in Takoradi

For the many Ghanaians home and abroad, living in Accra (the most populous Ghanaian city) affords a lot of opportunity for various services. With more than 2 million residents in Accra alone and so much urbanisation happening, it’s really easy to lose sight of how other cities and regions may be lacking in the tech environment we gladly enjoy.

I ended up in Takoradi, one of the past few days. Growing up, the city has been once I have come to love. Memories of short stays there, some nostalgic events, all make me love Takoradi and cherish it. The tech reporter I’ve become, I thought to look at Takoradi a lot more closely, thinking on how tech is placed mostly in Accra neglecting the other cities scattered across the country.

My initial search for a co-working space (where I was hoping to find some startups, techies, etc.) ended up with me meeting Prince “Smart” Bonney, one of the co-founders of iCode, a pseudo co-working space in T’di. Apparently, I was in a WhatsApp group with him. We met up somewhere in town, and ended up in a cozy pub at Champs, listening to him talk more about Takoradi and the tech space there.

Prior to our conversation, I had wondered if there we any tech startups operating solely from, or with office in Takoradi. With a relatively lower cost of living, it would be a good try.

iCode started out of Smart’s own passion to build a tech hub in Takoradi. Having lived all his life in T’di, Smart has become fond of the city, and longs to see it grow beyond boundaries. While studying at GTUC, Takoradi Campus, his passion for tech has grown even more, eventually picking up the idea for a co-working space and starting it with some friends.
With his own money, and some support from friends and family, Smart was able to begin iCode by holding introductory computer and coding classes for folks in Takoradi. Not having his own space then, he would go rent venues for the events, and settle debts with the fees, just for the sheer joy of empowering participants to learn how to code. Sometimes, he would use some space in their home.

So far, iCode has conducted 3 training sessions with participants totalling over 100. Within those classes, some of the courses treated span creating desktop applications hence VB, Access and SQL. Beyond teaching people to code, iCode has also held a Tech Talk, an event it used to help members find challenges within the society that technology can help to solve. Smart hopes that through such discussions, tech solutions will be birthed and startups will thrive within the region.

I digged into why Smart had not reached out to most companies about supporting the iCode initiative. With quite a sense of confidence, he expressed that he wanted iCode to gather a lot more clout and influence on their portfolio before reaching out to companies for support, which I found plausible. Also, he didn’t want to be holding too many events else be branded an events company. Such focus!

I was quite eager to know how most people who have grown in Takoradi have turned out. With my fondness of the city, I knew some SHS class mates of mine who hailed from there. Just like I had thought, most of the folks who grew up in Takoradi ended up in Accra, because it had a lot more to offer in terms of opportunities, growth etc. Had it not been for the oil exploration, I’m sure the story could have been worse. And that’s quite true, people go where the money is. He even commented on how young folks had resorted to travelling , sometimes illegally, to coastal Europe, mostly Italy for “greener” pastures.

Continuing on our discussion, I inquired how startups are generally doing in Takoradi, just trying to gauge how startup friendly the environment is. He mentioned that most of the startups centred around events whether it was promotion, decorations, photography, PR, etc. which is also quite similar to startups in Accra. Had I stayed longer, it would have been a better opportunity to meet several of such startups who would be at Barcamp Takoradi at the SSNIT Building the next day. I would then have had the opportunity to meet Piloloo Ghana, one of such non-tech startups which is due to organise a Blood Donation Drive in Takoradi on September 21. Over the past years, Piloloo has been involved in enhancing worn-out zebra crossings by painting them, organising a few social entrepreneurship events, etc.

That brings me to the next thought of concern to my visit in Takoradi. It’s commonly known that the educational system of a locality contributes immensely to the talented created, and retained within that locality. With the Takoradi Technical University being one of the only public universities in the city, that made some sense. I took some time to peruse their courses and found that there were not many courses related to tech, most of the ones that were, combined with other majors. e.g. HND Building Technology, HND Interior Design and Technology, etc. There were a few other courses which seemed focused on tech, namely HND Information & Communication Technology and HND Mechanical Engineering (Automobile, Plant, Production, Refrigeration and Air-conditioning options). I’m just hoping these courses will be as practical as their names sound, but that’s a discussion for another day.

Although Smart started iCode in September 2016, he seems to have worked it out quite well, already gathering the interest of some corporate folk. Coincidentally, on the day of our meeting, he was to meet 6 girls whom he was excited to coach and prepare for the MTN GirlCode Program, which would soon have a stopover in Cape Coast, something he desperately wishes had been Takoradi instead, and even questioned the organisers about. I was supposed to meet the girls also, would have been truly delighted to meet them, but our meeting just couldn’t come off!

iCode has a dream, to build a thriving and permanent co-working space which will train in software, capacity building, training, social entrepreneurship and even provide the services of an incubator. It was refreshing to find out that Smart was being mentored by one of the founders of iSpace. Also, within our meeting, I got to know that Smart had conducted some research on the few startups he had met in those events. He showed me an excel sheet showing what these startups were into, what would benefit them most, and how best to contact them. He also had his own email list, which he had collected from event participants, and a WhatsApp group they used for constant contact and catching up. Talk about user research!

All this feeds into his plans of enabling a crowdfunding platform — not necessarily his — mutually managed by several individuals who would financially support startups in the area, maybe for some return, or out of sheer goodwill.

Beyond our discussion, I made my few observations as well. With the so many ride-sharing startups launching in Ghana over the past year alone, it was surprising that none was in Takoradi. Relatively, the taxis in Takoradi are 25%-40% cheaper than Accra, so they might fair quite competitively with these ride-sharing apps, by the way.

It was also worth noting that telcos had had their fair share of the city. Surfline has quite a presence in Takoradi, with the other 4 main ones making names, and billboards, for themselves as well. While I am sure there are website development shops in Takoradi, I honestly believe there’s more room for startups. I remember reading on a startup which moved from Seattle to Morocco, and was completely enjoying it! If your startup is truly international and you have fewer to no Ghanaian clients, consider Takoradi for a month or two, or even stay there.

I enjoyed my talk with Smart, and will be excited to see his dreams of Takoradi becoming a tech-enabler come to pass. There’s no doubt I enjoyed my stay in Takoradi as always, but I just wish there were more tech startups in there I could speak to. I look forward to a day when that’s possible!