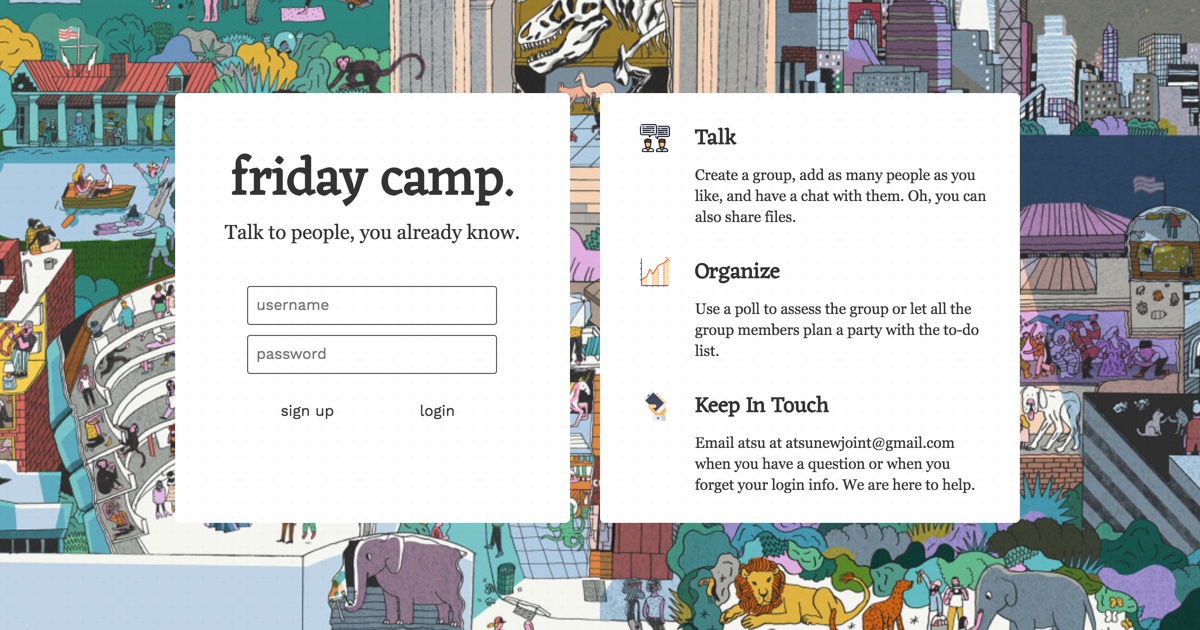 Chat apps have been among the most popular since the internet was popularised, and apps became a thing. The average person would have about 3 chat apps on their phone, shuffling between social, personal and work chat groups. Most of these apps, however, are built around personal chats. This is where Friday Camp makes the difference.

Friday Camp is a chat web app where anyone can create a group, add as many people as they like, have a chat with them and share files. You can take polls on the group and plan things with an expansive to-do list. Friday Camp is social media built around groups. So when you sign up, you have to create a group, say for your family. As the creator of the group, you have the power to add as many people as you want to the group.

Whatsapp, for instance has a group member limit of 256. On Friday Camp, there is no limit. You can exchange chat messages with all the people in the group, exchange and receive images, videos, and files of all formats.

As a basic privacy concern, anything done in the group can only be viewed by people in the group. Private and secure. A similar group can be created for friends, your study group and the secret group no one has to know about.

Friday Camp was built by US-based Ghanaian programmer Atsu Davoh who built this product from scratch as a motivation of improving his programming skills. Written within 3 months, with grid-based responsiveness from Bootstrap, and writing every other line of code, he believes the product is ready for the market.

“The backend is powered by PHP and the front-end by HTML, CSS, Jquery, JSON, and AJax. No backend frameworks were used. The site is hosted and served on Google Cloud Platform. I bought 4 empty servers (Virtual Machines) and installed a LAMP stack on one OS instance held together by the four virtual servers. The website files are then served by these servers; which makes the site very fast.”, he comments.

Atsu had more to say about the motive behind his product, “I hope that Friday Camp can serve as an improvement for those who are dissatisfied with the corporate entanglements of sites like Facebook. I hope it also serves as an inspiration to Ghanaian web developers that we here are capable of actual good work through effort and dedication.”

Thinking more about how this works, it could becomes a barebones collaboration tool, for teams and groups who are looking for something similar. Try the chat app and share your comments with below as Atsu will be reading.