Apps
Bisa and Kudigo are Ghanaian startups in 35 shortlisted startups for DEMO Africa 2017. Ghana is one of 10 countries represented on that list. 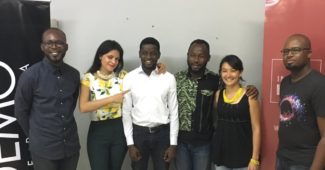 Apps
Practical Education Network has won the DEMO Africa Accra Innovation Tour event to be one of 30 startups who will pitch at DEMO Africa 2017.

DEMO Africa
Microsoft, under the 4Afrika Initiative, for the fourth year in succession, has confirmed its support for DEMO Africa which happens in Lagos.

DEMO Africa
Mavis Computel helps you learn languages via a digital pen and a talking book. They are one of 30 Top startups pitching at DEMO Africa 2015.

DEMO Africa
Edge books is a digital delivery platform in Africa which delivers and monetises digital content via its own e-reader app, Media+.

DEMO Africa
LocName helps people to create their own personal LocName containing their location, and put it under a unique name for future use.

DEMO Africa
Talking Bookz, one of the DEMO Africa Top 30 startups focuses mainly on publishing and retailing audio books, both local and foreign online.
Page 1 of 6